Skip to the content
Scientists have discovered evidence that suggests the universe was created after a giant explosion called Big Bang. All the tiny bits that make up today’s galaxies ,stars and planets suddenly appeared out of this explosion. In fact, the Big Bang also created the space itself. Even more bizarrely, the Big Bang also created Time! 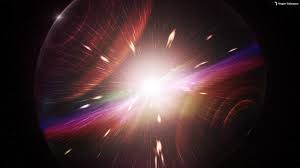 Because of the explosive nature of the Big Bang, the Universe has been expanding ever since it was created. This means that the galaxies have been flying apart and will get further apart in future. However, the force of gravity might all change this.

Gravity is an attractive force, which means that it tries to pull everything together. That is why when you fall, you fall down to Earth and you do not fall up, away from the Earth. Gravity is pulling you and Earth towards each other. Gravity means that every bit of the universe is attracted to every other bit.

So it is possible that, in the distant future, gravity might slow down the expansion of universe,stop it and reverse it. That would mean the universe would start to contract.

Then, in the very far future the universe would have the opposite of Big Band, sometimes called the Gib Gnab (Big Bang spelt backwards) or a Big Crunch. This might lead to a Big Rebound and another Big bang and so on. The history of the universe would be Big Bang, Big Expansion, Big Halt, Big Collapse, Big crunch,Big Rebound, Big Bang…

In other words, the universe did not start from nothing, but rather it started from the collapse of an earlier universe. Our universe is recycled version of a previous universe.

Unfortunately, we do not have much evidence to prove that this recycling thory is correct. Indeed, there is some evidence that indicates that the universe cannot reverse its expansion. Therefore, scientists continue to explore this mystery.