In a connected world, everything from basketballs to cars to refrigerators is coming online. 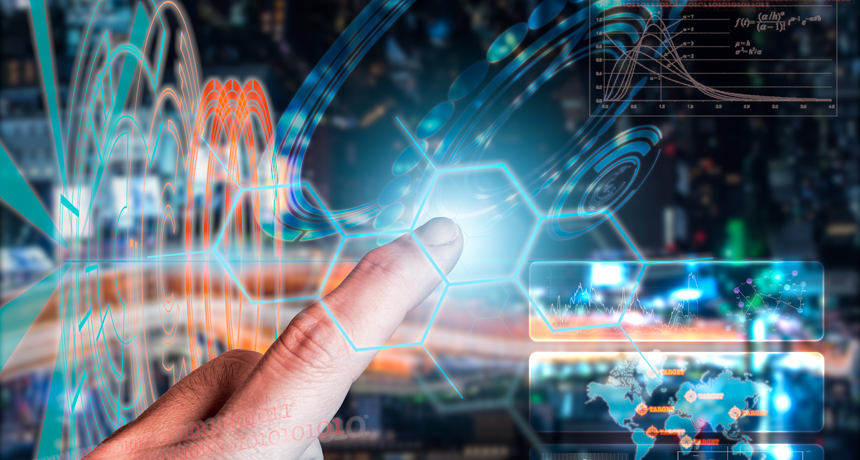 The touch screen on a phone, computer or other device (even a voice command) may be all it takes to control appliances, medical devices, a thermostat or more. A wide variety of such products and processes are already part of the growing Internet of Things.

A 94Fifty looks like an ordinary basketball. You can inflate, dribble, pass, shoot, swoosh and slam-dunk it. But there’s more going on than meets the fingers.

During play, the ball records how hard and fast a person dribbles and throws. It also measures the arc of a shot. It sends the data to a user’s smartphone. This phone then uses an app to analyze a player’s game. Then the app offers tips for better ball handling or for improving three-point shots.

Will this ball help a driveway hotshot become the next LeBron James? It’s too soon to tell. But many experts think it may well be part of a revolution in technology.

The 94Fifty is a “smart” basketball. It gets its name from the dimensions of an NBA court: 94 feet by 50 feet (28.7 by 15 meters). The ball “observes” the world around it. It then can use these data to calculate things and provide useful information to help a player get better. It’s part of the Internet of Things.

The 94Fifty basketball has sensors that collect data on a player’s game. That data is sent to a smartphone app, which offers coaching tips.

The Internet of Things is the idea that ordinary objects can be turned into “smart” objects that measure and interact with their environments. A smart refrigerator keeps track of what’s inside. A smart lightbulb turns itself off when not in use. A smart toilet flushes itself and texts a user if it springs a leak or is about to overflow. These devices might communicate with users through their smartphones or home computer networks.

Like every new advance in technology, the Internet of Things brings both excitement and challenges. Its promises include better healthcare, energy savings and a more connected world. One of its big challenges is to keep users’ data safe from hackers. (The second part of this two-part series addresses security risks posed by the Internet of Things.)

Object by object, for better or worse, the world is becoming ever more connected.

Every smart object is different. “Some have microphones, some have cameras, some have GPS sensors,” says Ebling. (GPS, or the Global Positioning System, is the technology behind navigation apps, for example. It uses satellites to pinpoint an object’s location.)

A smart medical device might use sensors to measure a patient’s blood pressure, pulse or blood oxygen levels. A doll called Hello Barbie uses cameras and microphones to recognize a child and talk to her. The smart refrigerator makes images of its contents with a camera.

A smart home will have devices and security systems hooked up to the internet so that they can talk to one another — and alert the homeowner is there are any problems. Or the owner could use a smartphone app to turn on lights or adjust the thermostat while still commuting home.

There are even entire smart homes. A smart house uses many sensors to conserve energy. One may measure temperature, another measure the lighting, and another track whether anyone is home. A smart house can observe the people who live there and change itself to be safer, more energy efficient and more comfortable.

Every object in the Internet of Things needs a way to share the data it gathers. Some send data using radio waves, a type of low-power radiation. This technology is called radio frequency identification, or RFID. An RFID chip on an object can store information that another device will read. (Pet owners get RFID chips implanted in their pets as a form of identification, for example.)

Many smart objects, like the 94Fifty basketball, don’t use RFID. Instead, they connect to a smartphone or other device using wireless communication. This is similar to how a computer connects to a wireless network.

These sensors and communication devices are cheap and easy to buy. That means almost anyone with inspiration and a little know-how in computer programming can create a “smart” device.

“I can buy a crate of parts that fit together incredibly cheap and write a little bit of software, and suddenly I have an Internet of Things product,” says Jonathan Margulies. He’s a security expert in Washington, D.C., who coauthored a book for students and experts called Security in Computing. To create “smart” products, “You don’t need a computer science degree,” he says, “just a clever idea.”

Connected objects raise many important challenges for computer scientists. Perhaps the most important one is security. Everything connected to the internet gives hackers a chance to steal data or sabotage the device. Yet many companies don’t pay enough attention to security, says Sye Loong Keoh. He’s a computer scientist at the University of Glasgow’s campus in Singapore.

A Nest thermostat is a smart device that learns its user’s schedule and habits, then adjusts the temperature in the house throughout the day to save energy.

These companies “just want to roll out a product,” says Keoh. “They won’t care about security until their devices are hacked.”

For example, the Hello Barbie doll isn’t like other dolls. It interacts with its owner. This toy recognizes a person’s voice and responds as if continuing a conversation. And this makes some people uneasy. Why? Hello Barbie works by connecting to a home’s wireless network. And when children talk to Barbie, the doll sends their messages via Wi-Fi and the internet to a faraway computer. That means any information that kids or parents tell the doll is heard or analyzed by computer software. Users of products like Hello Barbie usually don’t think about how a company will use that information.

Another challenge is how to use this technology to benefit people. Connected objects may be flashy and impressive, but that does not mean they’re achieving something useful. One area where they have potential to help people is in healthcare.

Doctors have to consider many pieces of information when they make decisions about patients. Sometimes all that information can be overwhelming. Imagine that in the future a doctor is caring for some patient with unusual symptoms. Sensors in a smart exam room might measure those symptoms and send them to a computer program. Then the computer scans up-to-date research on those symptoms. The computer can then quickly narrow down possible diagnoses, Ebling says, and share them with the doctor.

Ultimately, the doctor still needs to make a decision to help the patient. And that demonstrates one of the biggest questions about the Internet of Things, notes Ebling. “How do we get humans and computers to work together in partnerships,” she asks, “so humans do what humans do best, and computers do what computers do best?”

Scientists will be trying to answer that question for years, whether the technology is helping solve medical puzzles or just improving our three-point shots.

0 replies on “The IoT – Internet of Things”